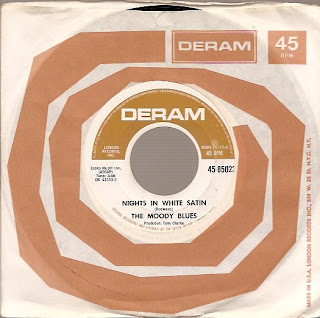 80. Nights In White Satin-Moody Blues-When this was released in 1968 it didn’t even make the national top 100. It wasn’t even a hit nationally, until after the last soundathon survey came out. Maybe the record company took notice of surveys like this, and decided to re-release the record. It was on enough soundathon surveys, in a high enough position, to be #80 overall.

79. Hair-Cowsills-The second of the three hits from the musical to be on this survey.

75. Uncle Albert/Admiral Halsey-Paul McCartney-Yes, 1971 again. Paul’s first #1 song without the Beatles, but of course, with Linda instead.

73. Soul & Inspiration-Righteous Brothers-The second on this survey for Bobby Hatfield and Bill Medley. But surprise Unchained Medley is not in the top 129!

72. Whole Lotta Love-Led Zeppelin-Now many of you will expect to see Stairway To Heaven near the top of this chart. Wrong! It wasn’t out long enough at the time of the 1972 survey to make it. If there had been a 1973 Soundathon, then it may have been there.

71. Sweet and Innocent-Donny Osmond-Imagine playing a countdown of these songs. There should probably be a commercial between 72 and 71. But it would be more fun to hear them segue into each other.

70. Rainy Days and Mondays-Carpenters-Probably one of my guilty pleasures, this song. It has always made me sad. Maybe I’ll play it again someday, and be sad again.

68. Easy To Be Hard-Three Dog Night The third “Hair” hit. A lot of people like this song, but it was Easy to turn off.

66. For What It’s Worth-Buffalo Springfield-Their one and only top ten national hit. They had many top ten hits locally, including Mr. Soul/Bluebird and Rock and Roll Woman.
Posted by KFXM Tiger Radio and K/MEN 129 in Doug's Stuff Room at 7:44 PM

To my taste "Purple Haze" has stood the test of time more then the others.