Thought I had exhausted my K/men memorabilia, but found my ticket for the K/men 20th Anniversary Concert.  Below it are the articles from The Sun newspaper about the concert, which were published the next day.
Donnie Brooks was the MC.  Groups included The Drifters, Coasters, Marvin & Johnny, Al Wilson and last, but not least, but definitely the LOUDEST,  Dick Dale.
Wes Westphal one of the K/men at the time organized the anniversary, and a bunch of the K/men were there.  I did take some pictures, but they still need to be found. 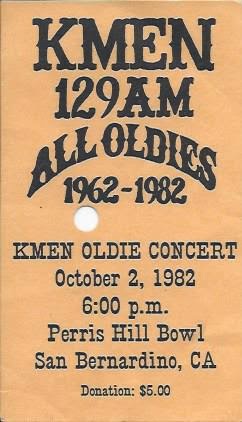 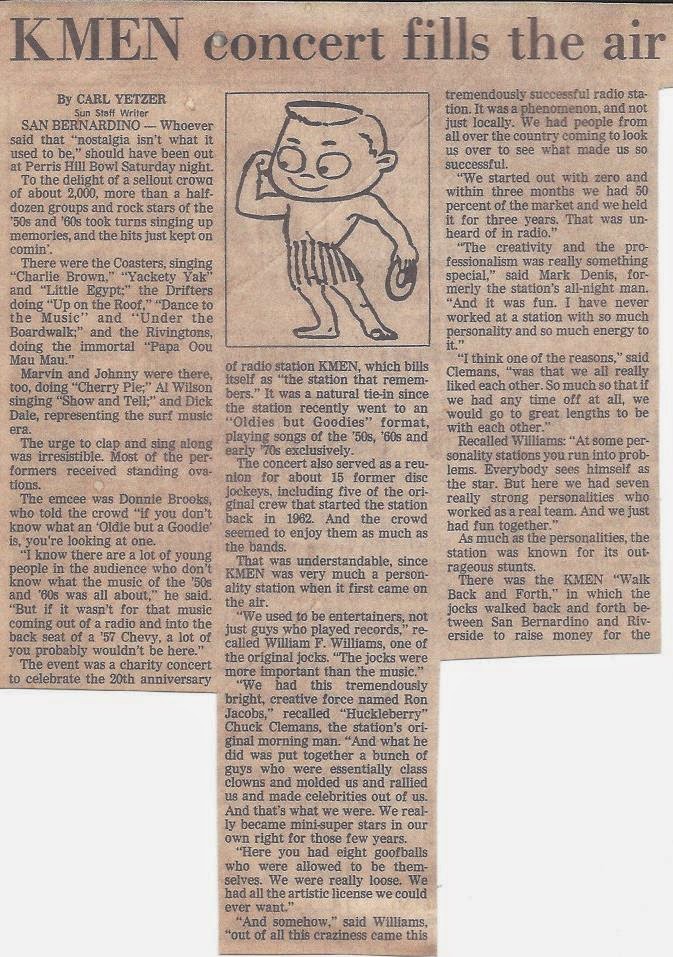 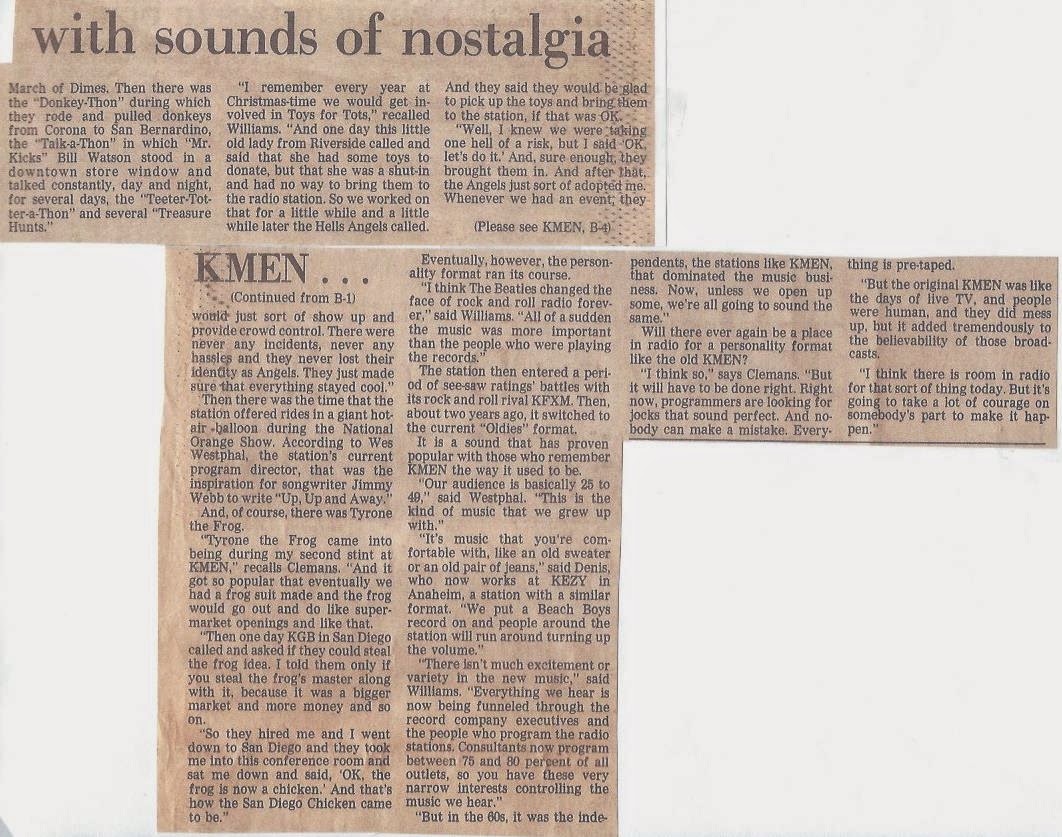 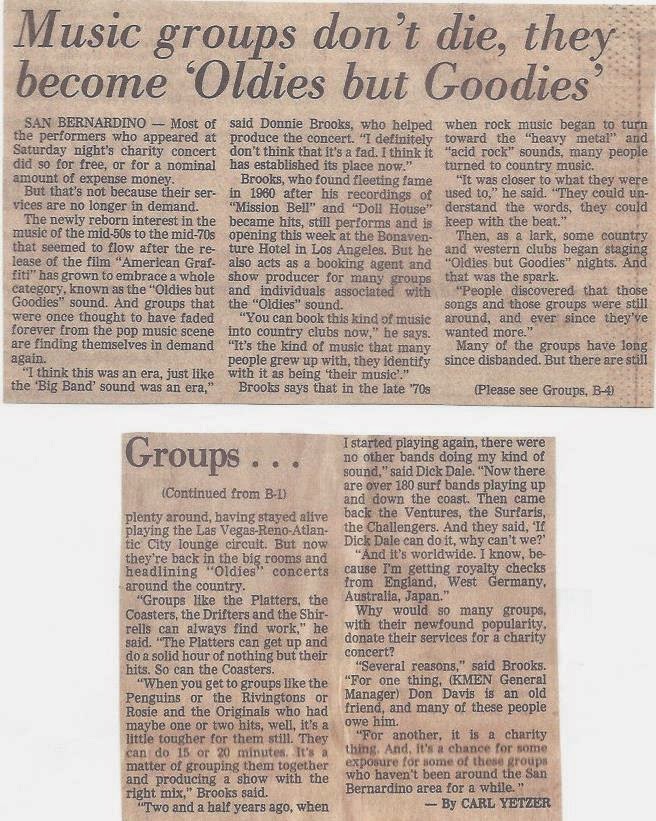 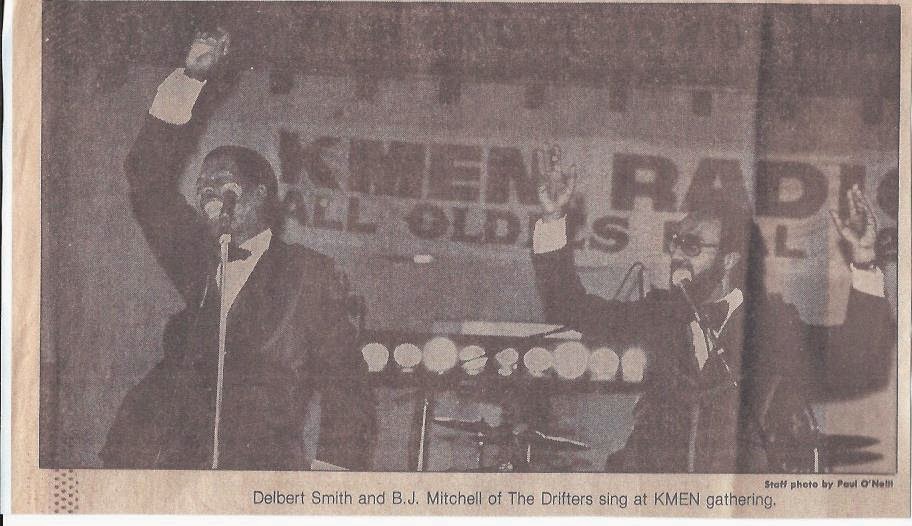 KMEN also had a similar 25th anniversary party on 8/15/87 according to the Sun-Telegram. Tickets were $15 and it was held at the Steelworkers Auditorium in Fontana. I was out of the area and unaware of it. To me it seems kind of unusual that they had to go out to Fontana for a venue but it was undoubtedly cheaper.


It was twenty years ago today
Sgt. Pepper taught the band to play
They've been going in and out of style
But they're guaranteed to raise a smile
So may I introduce to you
The act you've known for all these years
Sgt. Pepper's Lonely Hearts Club Band

I don't really want to stop the show
But I thought that you might like to know
That the singer's going to sing a song
And he wants you all to sing along
So let me introduce to you
The one and only Billy Shears
And Sgt. Pepper's Lonely Hearts Club Band

Doug! Do you have a lot of old 590 KFXM tune sheets from 1961. Actually Feb. Mar. or Apr. of that year. I'm looking for a listed tune called Blue Skies by The Biscaines. It was only played on KFXM. The groups manager and producer of that particular record was George Babcock who was a KFXM DJ at the time. IF you should find a tune sheet with that listing, could you email it to me at rave814 at aol dot com. (you know how to fix that so it'll mail right?) Thanks RV

In case any KFXM/KMEN lovers come by this way I thought I'd post this.

Just a further update about the "Wassail Song". I found it on Amazon available as an mp3 download. It's a track on the Jimmy Webb album "Legendary 1". Only 99 cents. I've been looking for it for years.

An Inland Empire write-up on laradio.com on January 27, 2016

“KFXM moved into the Holiday Inn studios along with KDUO/fm, their sister station, in the fall of 1963. It was a short move, since coincidentally the Holiday Inn was brand new and built at the same time the stand alone studios and offices of KFXM/KDUO were constructed on the west side of the hotel.

The old transmitter/studio site of KFXM was indeed in a small bungalow of a building that continued to house the KFXM transmitter. The Holiday Inn was located literally just a stone’s throw from that old fortress of a studio and the three towers. That huge piece of property was located at the intersection of the 10 and 215 freeways in San Bernardino.

At the time of the move, KFXM djs were separated from the rest of the radio station staff in that the management, sales and support staff were still located either at the California Hotel, which USED to house the studios and the quite a bit smaller tower set-up. The station also had a presence in the Mission Inn in Riverside, though I don’t know how extensive that was.

Up until the move to the new Holiday Inn facilities, the djs did their on-air shifts in that little building that the transmitter was in. I’m not exactly sure when the studios were moved out of the California Hotel.

KFXM’s glory days of Top 40 Rock ‘n’Roll radio were first broadcast from that little building circa late 50s through the fall of 1963 and then from the Holiday Inn in the fall of 1963 on until the end of their AM Top 40 format. KFXM was never challenged in the Top 40 Rock ‘n’ Roll wars until March 10 of 1962 when ‘K/men 129’came to town, taking over the old KITO studios in Highland, also in a big field – a cow pasture.

KFXM had a few competitors, like KRNO 1240, up until K/men came to town but they didn’t do that much to derail the ‘Big 59’s’ dominance. Even when K/men came to down, it still took about a year to finally knock KFXM off. Ironically, with the move of KFXM out of their humble little on-air building to the length of a football field away into the new state of the art studios at the time in the Holiday Inn, again, fall of 1963, the station ‘fumbled’ away their ratings by dismissing the entire current jock staff, flushing the ‘Fabulous 59’ survey and totally revamping the format into ‘Big Top’ radio, with a circus type branding and bringing in all new deejays, like Larry Lujack [future Super Jock at WLS-Chicago] for mornings and a host of others that came and went in the course of a couple of years.

The decision was costly. The dismantling of their heritage was the exact wrong move when across town the year and a half campaign of K/men to ‘Chip, chip, keep chippin’ away’ at KFXM’s numbers was helped greatly by KFXM itself when it voluntarily gave up on its A-Team of talents and reduced itself to being the ‘new kid on the block’ by starting at square ONE. [By the way, K/men’s FIRST SONG PLAYED on Saturday morning, March 10th, 1962 by ‘Huckleberry’ Chuck Clemens was Chip Chip by Gene McDaniels. It was an ‘inside message’ at the time to KFXM that the mission of K/men would be to chip away at their ratings.]

Back to the future, the ‘Fatal Flaw Fall’ of 1963, the long-time KFXM listeners were jilted by the sudden unfamiliarity of EVERYTHING but the music and fled to K/men. It wasn’t until Al Anthony came into town in 1965 and took over the programming reins that KFXM slowly clawed its way back to the top. The new studios were cool, sure, BUT at the very same time, the sudden alienation of listeners was a huge misstep. I lived and listened through it all as a junior high and high school kid in Fontana who loved radio and made it my life’s dream, thanks to the Top 40 radio wars in the Inland Empire.” – Bruce Chandler