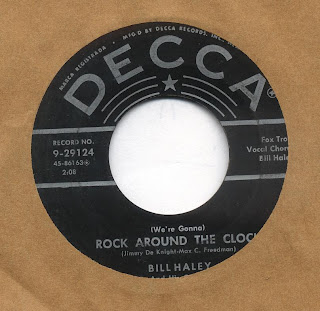 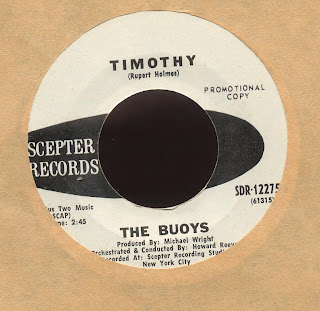 From 1967 through 1972 K/MEN did a Top 300 Soundathon where the listeners sent in their favorite 5 songs, and K/MEN tabulated them and played them back Memorial Day weekend.

Many years ago I went through the songs from the six surveys and assigned each song a value based on the number it was on each survey. Added up the totals for the seven years, and came up with my own survey.

I don’t remember the exact values I used for each, so don’t ask! But it went something like this. #300 got 1 point #299 2 points, and so on. I know the top ten got bonus points, but I’m not sure how much at this date.

Also this was before I had a computer, so all done with a calculator, pencil and paper.

So I’m going to present from #129 (a few at a time) my Combo Best of the KMEN Soundathons.

129. Rock Around The Clock-Bill Haley & The Comets-One of the first big hits of rock & roll. I believe the oldest song on the survey.

127. Timothy-Buoys-Why people voted for this I don’t know. It was high enough on the surveys for a couple years to be #127.

126. Your Song-Elton John-His first hit and has survived from the oldies format to the classic hits format.

124. Summer In The City-Lovin’ Spoonful-The hit John Sebastion and his brother wrote.

122. Lay Lady Lay-Bob Dylan-Not one of my favorite Bob Dylan songs at the time. I still preferred his earlier songs.

121. Going Out Of My Head-Little Anthony & The Imperials-A hit in 1964 when this type of music was being overshadowed by rock and roll bands.

120. I Think I Love You-Partridge Family-Well, they were popular and this was their biggest hit.
Posted by KFXM Tiger Radio and K/MEN 129 in Doug's Stuff Room at 3:35 PM

Nice survey. I like the notes
on each. Tibits are always fun.